Why is it important the registration of pediatric NFX in the US? 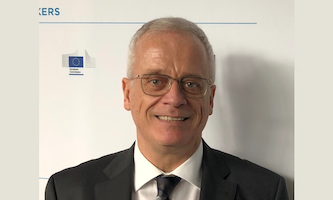 There are only two drugs available for the treatment of Chagas disease (benznidazole-BNZ- and nifurtimox –NFX-). Both of them are already registered for pediatric use in the United States. The last of them in getting the registration is nifurtimox, due to the work of Bayer Company. Bayer and PAHO keep a NFX donation program under a collaboration agreement for the endemic countries of Latin America. We are curious about the possible connotations or benefits that the registration of NFX in the US could have for the rest of the affected countries.

In this new coffee break, we chat with Ulrich Ulrich-Dietmar Madeja, head of NTD programs in Bayer. Ulrich, as we call him in the Chagas Coalition, will share with us his Company’s views about this news.

1. Could you share with the Chagas Community a first short comment on the news of the FDA approval for Lampit (nifurtimox) in the US. Why is this good news for the Chagas world?

Recently the US FDA approved a new 30 mg and a 120 mg tablet formulation of Lampit (nifurtimox) for the use in children from birth to 18 years of age. The approval meets the urgent medical need for a pediatric formulation for precise weight-adjusted dosing.

2. Up to now, Bayer has been donating NFX to the endemic countries through PAHO under donation agreements. Is this donation policy incompatible with registering the drug for private or commercial use?

Bayer will continue to support the WHO/PAHO in fighting Chagas’ disease, providing the new pediatric formulation of 30mg as well as the already available 120mg tablet as a donation to the WHO/PAHO. As agreed with the WHO/PAHO, registration of the product in endemic countries with the highest disease burden is the first basis step to ensure broad access to treatment. Country registrations and approvals do not only facilitate the import of medicines into these Latin America countries but also open opportunities to increase the availability of these products via tenders or other commercial channels.

3. How many patients, according to your data, have been treated by NFX in the world, during last year?

4. As well as BNZ, NFX has been registered in the US only for pediatric use. Is there any plan to expand the US registration to the use in adult patients?

Our current approach in the US is focused on making the product available for those who need it the most: children of all ages. The new tablets can easily and reliably be split into halves, which helps to adjust the dosing based on a patient’s bodyweight, thereby covering a wide range of weights from infants and children to adults. In addition, it disintegrates rapidly in fluids by forming a so-called “slurry” which can be swallowed much more easily esp. by small infants and babies. We know that the younger the patient is and the earlier the treatment after infection, the better the chances of recovery.

5. Although your company provides the drug for free through donation programs, is Bayer committed with the research of new and improved tools of diagnosis and treatment in Chagas Disease?

Bayer commits itself to providing Lampit – including the new 30mg formulation – as a donation to the WHO/PAHO according to their requirements, respecting the amounts requested by the Ministries of Health (MoH) and Chagas’ Disease Control Programs in the endemic countries of Latin America.

6. How do you see the evolution of the fight against Chagas Disease in the last years? What achievements and challenges are remaining?

For decades vector control was the focus for the fight against the transmission of Chagas’ disease. Progress has been achieved and vector transmission eliminated in some endemic areas in Latin America. The focus has been shifted to treatment of children as well as screening of pregnant woman and subsequent treatment of babies born with congenital Chagas Disease.

Achievements has been made with the development of small tablets of Lampit easing treatment of babies and infants. The limitations remain to be lack of adequate diagnosis and limited access to available medications as well as the lack of new treatment options.

7. What are the main steps to take in, according to your view, to scale up towards the defeat of Chagas disease in the next decade?

The access to the available treatment options need to be improved esp. in the endemic countries ensuring that patients diagnosed with Chagas disease are treated. Furthermore, there is an urgent need for the implementation of affordable but reliable diagnostic tests that allows immediate diagnosis and wide screening programs of patients at risk.

Thanks Ulrich for this coffee break and congratulations.