Updates on Chagas Disease in the U.S.

Updates on selected activities related to Chagas disease care and treatment in the United States (U.S.) 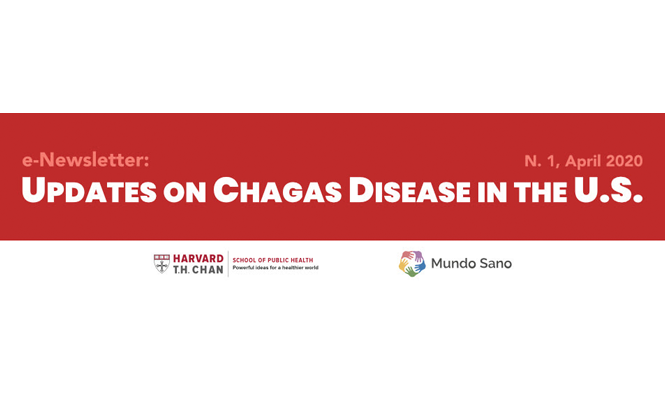 Screening for Trypanosoma cruzi in the United States

In 2015, the Centers for Disease Control prioritized the education of U.S. healthcare providers on Chagas Disease. As a result, cooperative agreements were created between the CDC and three U.S. academic institutions to develop outreach programs targeting this population. Having both local and imported cases reported, Texas was an obvious place to open up dialogue with local physicians and others regarding how best to manage this neglected and relatively unknown disease. Led by Dr. Paula Stigler Granados from Texas State University, the Texas Chagas Taskforce was soon formed. This multi-disciplinary group pulled together experts from across the entire state to discuss current and relevant research, as well as strategize how best to disseminate important information and trainings to healthcare providers. One activity that was a result of these efforts was the formation of a tele-mentoring program on Chagas disease via an already established learning platform called ECHO.These monthly interactive online sessions provide continuing education credit, as well as case based discussions with Chagas disease experts across the country. Another important activity that came about as a result of the Taskforce’s efforts is the pilot program for screening newborns in Texas. This program will help us to better understand and estimate the prevalence of Chagas disease in Texas and the potential for congenital transmission.

The Rethinking Chagas Workshop highlighted several gaps in screening and diagnosis of Chagas disease in the U.S. Most cases are identified through blood donor screening. Before its discontinuation in February 2020, the AABB Chagas Biovigilance Network reported 2462 T. cruzi-positive donations from 2007-2019, representing <1% of estimated U.S. cases. Detection of seropositive donors declined from 321 annually from 2007-2011, to 107 annually from 2011-2019. Screening via the healthcare system is necessary to identify more patients, but is not widely available due to low provider awareness, Chagas disease’s long asymptomatic phase, and limited availability of tests. Of four FDA-cleared tests for clinical use, one is not in production and another lacks a U.S. distributor. Only one is a point-of-care test. Workshop participants discussed the limited data on these tests’ performance in U.S. populations. Another important concern was a lack of clear, consistent processes for diagnostic confirmation, given heterogeneity among major laboratories and between state health departments.

Participants agreed on three key actions to improve diagnostic processes in the United States: 1) perform further research on the performance of the FDA-cleared tests; 2) increase the availability of diagnostic tools by working with manufacturers to strengthen distribution; and 3) clarify diagnostic processes. The following year, with support from DNDi, several clinicians and investigators organized a working group to draft evidence-based diagnostic recommendations. The aim is to create a tool for providers that facilitates identifying patients at risk and coordinating testing, a necessary step to increasing access to appropriate care for this neglected disease.

Treatment Programs for Chagas Disease in the United States

The Center of Excellence for Chagas Disease based at Olive View-UCLA Medical Center: An Update on Recent Activities

The center is trying to spread the message that early screening, diagnosis and treatment is key to decreasing complications. In addition to the medical benefits, screening can also have humanitarian and economic benefits due to prevention of the morbidity and mortality associated with heart failure. With the program’s success, they have directed a great deal of attention towards increasing awareness and involvement of providers, public health departments and other interested parties across the United States. For example, Chagas disease is now reportable to the Department of Public Health in Los Angeles County. The treatment center is currently focused on increasing awareness among primary care physicians so that patients may be treated as quickly as possible, especially since treatment is readily available in the United States.

East Boston: The Role of Patient Care Navigation in the Care of Chagas Disease Patients

Clinicians devoted to their patients from Latin America, and determined to provide the best possible care for them, began screening for Chagas disease at the East Boston Neighborhood Health Center in March of 2017. Infectious Disease specialists at Boston Medical Center, the health center’s major academic referral center, had previously declared their determination to care for patients with Chagas disease. One to two patients each month received this diagnosis, yet far fewer patients were appearing in the Infectious Disease clinic for evaluation and treatment.

Once the Strong Hearts project’s coordinator was able to begin her patient care navigation work, she found that an inability to communicate in English with the Infectious Disease clinic’s scheduling staff, fear to ask one’s boss for time off from work, fear to leave one’s neighborhood and venture into unknown and possibly hostile spaces, fear of ICE and lack of insurance were reasons patients could not attend Infectious Disease clinic appointments. Some of these barriers were quickly remedied by the clinic, e.g. schedulers made phone calls in the patients’ language, but others were not easily removed.

For over a year, Strong Hearts had no care navigator. Recently, with stable funding, a full-time project coordinator has begun to focus on enabling patients already diagnosed with Chagas disease to access specialty care. He accompanies patients through every step of the process at which they need support.

Most patients would benefit from an assigned care navigator by their medical center. Until all patients receive systemic support to attend our hospitals, which are only marginally accessible to the poor and powerless, the Strong Hearts navigator will hopefully make a path with his work. As summarized by the poet Antonio Machado: Traveler, it is your footsteps that make the path and nothing else; Traveler, there is no path, you make the path by walking.

Since partnering with Drs. Yagahira Castro and Robert Gilman on the seroprevalence study of Chagas in Latin American immigrants to the DC area (ending in Sep 2018), we have established a multi-site follow up clinic to provide basic cardiac testing to seropositive individuals, and antiparasitic therapy to those for whom it is appropriate. We have treated 5 individuals in the past 2 years, and have recently seen our 71st patient in follow up clinic. We have continued our screening efforts: in the past 18 months we have screened an additional 150 individuals, 24 of whom tested positive on rapid testing. During that time period Jenny Sanchez has been appointed Vice President of FindeChagas, and will be travelling to Geneva in the next month to help organize World Chagas Day materials. Rachel has also given over 15 talks to medical groups including Cardiology and OBGYN grand rounds, webinars, national meetings, and served on the writing committee for the World Heart Federation Chagas disease Roadmap and co-authored the chapter on Echocardiography in Chagas Disease for the ASE textbook. We are gearing up to increase the volume of screening with a goal of sreening 1000 more individuals in the next year, and are revamping and expanding our educational materials and website.

Benznidazole Distribution by Exeltis in the United States

2019 marks the first full calendar year since the FDA approval of benznidazole tablets. Throughout the year, benznidazole was dispensed to 146 patients across 28 states. On average, a total of 12 patients were treated on a monthly basis, which represents three times more patients treated versus pre-FDA approval dispenses.

In addition, a total of 107 physicians prescribed benznidazole at least once. The vast majority of activity can be traced to the states of California, Texas, and Massachusetts, encompassing 48.6% of all the treatments dispensed.

This is the first glimpse of information for a full calendar year since FDA approval of benznidazole. Access to treatment is one of the fundamental barriers in regards to Chagas disease in the United States. This information highlights an evident improvement in this matter, and serves as the baseline in which to build upon.

Efforts to Support Treatment of Chagas Disease in the U.S.

Professor Caryn Bern provided advice to Mundo Sano and Exeltis on improvement of the website information available to providers seeking to prescribe benznidazole. The information pamphlet “Important items to address before prescribing Benznidazole in the USA” was prepared and is now available in English and Spanish on the Mundo Sano website.

Efforts to Develop and Disseminate Clinical, Diagnostic, and Epidemiological Information to Clinicians who Manage Patients with Chagas Disease in the U.S.

Approximately 45 U.S. medical practitioners from 16 different states have signed on to the U.S. Chagas Disease Providers’ Network. The network has the following aims: (1) To facilitate local/regional referral of patients seeking a provider for diagnosis and management of Chagas disease; (2) To act as a platform for treating physicians to seek input or advice on diagnosis, drug treatment and management of Chagas disease from knowledgeable practitioners; and (3) To disseminate information about Chagas disease diagnosis, treatment and management in the U.S., including new recommendations, CME and other resources.